Dizzying Rise to the Top

If there is one perfect example of a team successfully racing to the top of the Bundesliga, it has to be TSG Hoffenheim. The soccer team has been promoted to a higher league seven times since 1990 and is playing in the Bundesliga since the 2008-09 season. Great expertise and full dedication from everyone involved – the qualities that have led to TSG Hoffenheim’s success over the past decades are also crucial to the RIAL brand, which has been associated with the club as an Official Business Team Partner starting in the current 2019-20 Bundesliga season. For over 40 years, RIAL is manufacturing high-quality alloy wheels and is playing in the top league with its competitors.

The RIAL blog now takes a look at the exciting story of TSG Hoffenheim’s rise to the top, which all began with a failure. With its defeat in the relegation match in Elsenz after the 1989-90 season, Hoffenheim descended to the Kreisklasse A district class. But the bad showing would also serve as a turning point – after attending the game, SAP founder Dietmar Hopp decided to support his hometown team on its path out of the lower rungs of German soccer.

The first years of this partnership brought one victory after another. From 1990 to 1996, TSG Hoffenheim managed to ascend from its local amateur league to the higher Landesliga and on into the higher Verbandsliga. By 1999 the shift was visible on the ground in the town of Hoffenheim. Patron Dietmar Hopp had sponsored a new clubhouse for TSG complete with a sports complex and, most noticeably, a new stadium, which would later be named after him.

All these developments would pay off in spades. TSG Hoffenheim ascended to the Oberliga at the end of the 1999-2000 season. It would not stay in this league for long with new coach Hansi Flick though. After securing their second championship title in a row in 2001, the TSG soccer team ascended once more into the Regionalliga, the fourth tier of German soccer.

They would play in the Regionalliga for the next six years. It was during this phase that TSG, just a regional league team from the Kraichgau region, caused a soccer sensation when they ejected Bundesliga team Bayer 04 Leverkusen from the German Cup round of 16 in December 2003, giving TSG fans their biggest Christmas present in advance. The club went on to open a modern training center in Hoffenheim and fully professionalize its team in 2004.

Hoffenheim ushered in a new era in June 2006: head coach Ralf Rangnick brought new leadership to the team, and former national hockey team coach Bernhard Peters joined the sporting management team. At the end of the season in 2007, TSG achieved its long-awaited promotion to the second Bundesliga, where it would dominate once again. After seven victories in the second half of the season, TSG 1899 Hoffenheim rose into the highest division of German soccer, the first Bundesliga, in 2008.

The Kraichgauer team kicked things off with a remarkable showing in the first half of their first Bundesliga season. As the PreZero Arena in Sinsheim and the team’s training center in Zuzenhausen were still under construction at this point, Hoffenheim played its home matches at Carl-Benz-Stadion in Mannheim. TSG subsequently suffered from injury-related problems but still ended its first Bundesliga season with a strong seventh-place finish.

The following years saw Hoffenheim hover in the mid-range of the Bundesliga table, with a particularly turbulent and nail-biting phase in the 2012-13 season. A total of four coaches struggled to carry the team, with head coach Markus Gisdol barely managing to prevent the seemingly inevitable automatic relegation with a spectacular victory in Dortmund. Hoffenheim defended its place in the Bundesliga with two more victories in the relegation playoff round against Kaiserslautern.

Then came the years when TSG became synonymous with spectacular soccer – great matches and high goal counts. Hoffenheim scored 72 goals in the 2013-14 season, and finished the 2014-15 season in eighth place. In 2016, the team once again successfully avoided relegation, and would rise to play at an entirely new level in the following season – under the leadership of young coach Julian Nagelsmann, Hoffenheim secured a place in the Champions League playoffs, competing internationally for the first time. 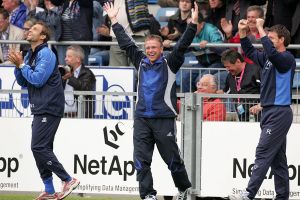 Das The 2017-18 season saw the greatest success in the club’s history thus far. With its third-place finish in the Bundesliga season, TSG Hoffenheim secured a spot in the Champions League.

RIAL is excited to follow the future trajectory of TSG Hoffenheim as an Official Business Team Partner and is proud to play a part in writing the next chapter of the club’s remarkable success story.