TSG Hoffenheim as a Technological Trailblazer

TSG Hoffenheim as a Technological Trailblazer

A Pioneer in Digital Technologies

Technology is decisive – this is true both for the soccer stars of TSG Hoffenheim and the high-quality alloy wheels made by RIAL, which is sponsoring the club as an Official Business Team Partner starting in the current 2019-20 Bundesliga season. This text does not describe the elegant ball control of the soccer experts from the Kraichgau region, however, but two particularly exciting digital technologies in Hoffenheim’s soccer project: SAP Interactive Data Space and the Helix Arena. 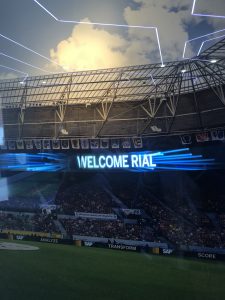 The SAP Interactive Data Space at the TSG training grounds in Zuzenhausen collects all data relevant to TSG Hoffenheim’s sport and business activities – allowing it to be instantly analyzed in a unique collaboration space by the club’s management, coaches, and players. The 16 seats at the interactive conference table are equipped with touchscreens. A seven-meter-wide glass display at the end serves as a projection surface for various solutions, data analyses, or individual content, supporting data-driven strategic planning in an entirely new way. The display is interactive, enabling users to edit content by touch. This innovative collaboration between SAP and TSG Hoffenheim underscores the club’s role as a technological pioneer and makes yet another contribution towards its success in the world of professional soccer.

A second highlight among the digital innovations at TSG Hoffenheim is the Helix Arena. The trailblazing training device consists of a panoramic movie screen six meters in diameter in which the players must solve various challenges using a controller. The goal of the digital training programs is to increase the speed of the players’ decision-making. The Helix Arena supports this with basic training programs and a futuristic game simulator in which players can practice exactly the movements they need to triumph on the field. To achieve this inside the 360-degree movie screen, they need to not only focus on what is happening in front of them, but also be aware of what is going on behind them – just like in an actual match.

For example, one of the five different training programs is a multiple object challenge in which lots of robotic figures in two different colors are running around randomly. The challenge for the player is to follow two specific figures that are identical to all the others until the end of the game. This requires intense concentration, not least because the figures move faster with each new level. The increasing speed is meant to bring players to their individual limit and to simulate the level of constant awareness that is crucial on the field when playing soccer at the highest level. 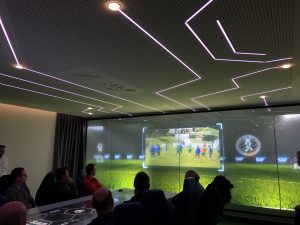 The main program, called Neo360, transforms the Helix Arena into a top-class gaming hall. The wall projections are 3D, and VR technology ensures extraordinary image depth. The player must pass the disc-shaped gaming device to their fellow players using the controller. The catch: the teammates are in motion and partially blocked by opposing players, making a successful pass possible for only a very short moment. The player is notified of whether the passes arrive or get intercepted through an impressive sound backdrop. Gamers use the term “immersive” for such all-encompassing virtual experiences. Neo360 completely immerses players to achieve the best training effects possible.

As an Official Business Team Partner and a brand with state-of-the-art products, RIAL considers TSG Hoffenheim’s role as a technological pioneer in professional soccer a particularly exciting and innovative aspect of our collaboration.