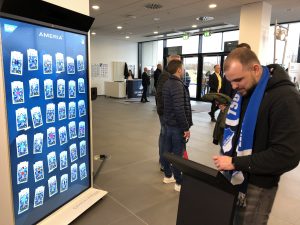 It was a dream come true for the 26 soccer fans who won our top prize – a whole weekend of Bundesliga action at TSG Hoffenheim with plenty of chances to rub elbows with the star players! With the slogan “Make it RIAL!”, the Fall 2019 prize draw from the well-known alloy wheel brand was all about top-notch professional soccer. And just like on the soccer pitch, the RIAL prize draw required a team effort. Teams of five from garages and wheel dealerships were the lucky winners. 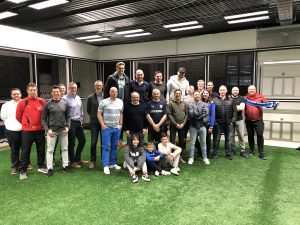 In February 2020, the winners spent an exciting weekend getting a taste of the professional soccer lifestyle of TSG Hoffenheim’s players. At the center of the action was the TSG Hoffenheim home game against Bayer 04 Leverkusen. Before kick-off, the guests were treated to a stadium tour in which they could sit on the coach’s bench and in the press room, look behind the scenes, and watch television crews prepare for the game broadcast. The winners watched the game itself in an exclusive VIP lounge – where the 2:1 Hoffenheim victory made for an even better atmosphere. 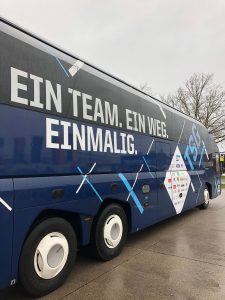 The following morning’s transportation was no less exclusive: the TSG Hoffenheim team bus whisked the winners from their hotel to the training ground in Zuzenhausen, where they naturally paid a visit to the Footbonaut. This state-of-the-art soccer robot deploys eight ball machines that fire balls from varying directions and at different speeds toward players on the 14×14-meter artificial pitch. The players must shoot the ball into one of 64 target squares, allowing them to train their speed, reaction time, and precision. The winners were wowed by the technology, and the TSG representative recognized some real soccer talent among the guests. The visitors were also fascinated by the interactive SAP lab, which processes TSG training and match data. This is where employees hash out new strategies at an interactive conference table. Last but not least, the lucky winners were treated to a meet & greet with Stefan Posch during a banquet at Schloss Seehälde. The professional player had been in Hoffenheim’s starting lineup the previous day. Posch was not only happy about the home-turf victory, but also pleased to meet a group from his native Austria among the visitors.